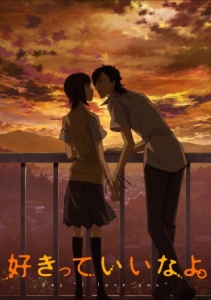 Today I will focus on two school romance theme shoujo manga that also have an anime adaptation: Sukitte Ii na yo. and Ookami Shoujo to Kuro Ouji. I enjoyed the storylines of both manga, but I felt a little indifferent about the execution of the anime adaptation.

This shoujo manga is about an introverted and independent girl named Mei Tachibana. Mei is used to being alone until one day Yamato Kurosawa—an assertive, outgoing high school boy—tries to make an effort to befriend her. Yamato begins to fall in love with Mei after she roundhouse kicked him at the staircase. He found Mei attractive because she had no interest in him. She didn’t care for his popularity or looks. Eventually, the two become a couple, and Mei slowly starts coming out of her shell.

The thing that I like about this manga is how the couple goes through love trials that test their trust within each other. Each situation they face, Mei becomes more self-confident about herself. Furthermore, the manga tackles some serious issues like bullying and body image.

Anime or Manga? Manga. I would pick the manga over the anime. The anime only touches the surface of what happens to Mei and Yamato’s relationship. In addition, the supporting characters are just minor in the anime. These supporting characters have a bigger role in the manga; in which they also go through their own personal struggles and issues like the model, Megumi.

Erika Shinohara is a liar. She tells her friends about all her “romantic experiences” even though she never actually had a real boyfriend. In order to prove that her latest charade is true, she takes a cell phone picture of a handsome guy on the street. She finds out that the boy she took a picture of is her classmate, Kyouya Sata. She explains the predicament she is in to him, and Kyouya agrees to be her pretend boyfriend. At first, Erika thought Kyouya is a sweet guy, but later on, she learns that he is a cold sadist. He takes advantage of Erika’s situation and treats her like a pet dog.

Anime or Manga? Both. I actually enjoyed both forms for different reasons. Both, the manga and anime kept the comedy at an all-time peak. However, like always, the manga has a lot of depth in regards to storyline and characters. I felt that the anime should have been divided into two seasons as oppose to a thirteen episode anime. There is a lot that they could have developed on such as stronger background stories for the supporting characters.

The English title of the manga is Wolf Girl and Black Prince. From the title, the audience can see how the title reflects on the main leads’ personalities. However, the anime does not really dive into these negative personality traits, which in my opinion kind of loses the significance of the title. I kind of wish that the anime had more scenes or episodes of their master-servant relationship instead of quickly developing a boyfriend-girlfriend relationship halfway through the series.

On a side note, I would like to say that I enjoyed the opening and ending songs. Those songs were fitting to the series.

13 thoughts on “Anime or Manga? A School Yard Romance” Leave a comment ›