Magic-kyun Renaissance is a masterpiece of hot male characters. One aspect that I like about this anime is the colorful settings, especially when each character brings forth sparkles while creating art.

I wasn’t a fan of the music, though, that was tactless. Okay, I know that’s harsh to say, but I never was a fan of the idol/boyband music in musical anime. A majority of the time it’s cheesy, happy music with lame lyrics. I watch these music-based anime mainly for the storyline as opposed to the music even though that is an essential part of the series. The music never seems to be ear candy to me, but that doesn’t necessarily mean that I don’t enjoy these type of anime. In fact, one of my favorite musical anime is Dance With Devils. Despite listening to the horrendous music, I actually like the storyline—the ending wasn’t something I expected in a reverse harem (which is why I liked it so much). Anyways, I shall stop ranting about the idol music in these series and go on to discuss some thoughts about the show, Magic-kyun Renaissance.

Kohana Aigasaki transfers to Hoshinomori Private Magical Arts High School, a school where art becomes magic. The students at this school are known as Artistas and are taught to harness their passion and love of their craft in order to spread joy to people. Upon arrival, Kohana instantly becomes part of the planning committee for the school’s yearly cultural festival, Hoshinomori Summer Festa. Kohana and six other boys are tasked to plan the best festival for their peers. They are also competing to become the school’s Artista Prince and Princess.

As a reverse harem, the storyline has the typical formula in each episode: the main girl solves a dilemma or helps heal a personal struggle with one of the main guys. Her presence and aid capture the hearts of the guys. Now Kohana does this in order to gather all the guys to help out with the festival planning. However, there are some loose ends to this storyline. The anime emphasized the importance of the school’s Artista Prince and Princess; thus, I thought that the main girl would pick a guy or that the school decides on the couple. In this series, we don’t know who the prince and princess are despite it being a major component in the plot. This is something that I didn’t like about the series as it didn’t provide conclusions to things that were mentioned in the beginning. 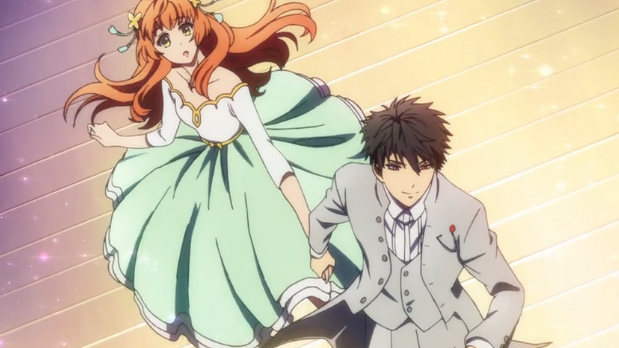 Now, I assumed that the plot would simply focus on the planning of the festival and Kohana’s interactions with all the guys, but there’s more to the story than I thought. After the success of the festival, the group decides to continue planning school events and thus, the Hoshigei event committee was born. Yet, soon after, Kohana loses her passion for flower arranging. Thus, what was to be a simple anime all about fun and creation turns into an inner struggle of losing one’s identity and trying to find it again. Kohana loses her purpose for flower arrangement as it seems that she’s only a carbon copy of her mother’s legacy. Kohana has no originality or passion when she creates and it is shown when she is unable to create her own sparkles. Yet, the guys come to her rescue like she did for them.

Magic-kyun Renaissance is an anime that encourages being yourself. All the characters are really quirky and passionate about their art that they seem a little aloof from the average person but that’s what makes them interesting characters. The overall message of this anime is that regardless of what life throws at you, you should just be you and believe in yourself and your passions (such a cheesy message I know).