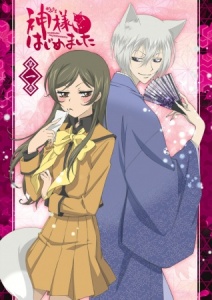 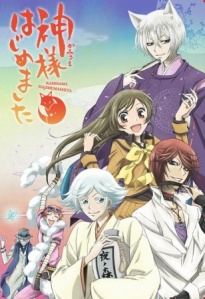 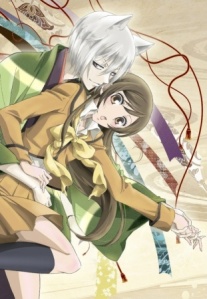 (Pictures Above Via MyAnimeList)

Now that the 2015 winter anime season has come to an end, I am now able to binge watch through series. One of these series is Kamisama Hajimemashita. I am really happy that they made a second season of this show because all the characters are hilarious and adorable.

Kamisama Hajimemashita is about a girl named Nanami Momozono, who was kicked out of her home after her father ran away from gambling debt collectors. While sleeping on a park bench one night, Nanami encounters a mysterious man, Mikage, who gives her the opportunity to reside at a local shrine as the land god. Nanami hastily agrees to the proposal. Upon her arrival at the shrine, she meets her soon-to-be familiar, Tomoe, a fox demon.

In season one, Kotetsu and Onikiri had a more active role, but in season two, they didn’t appear as often. I kind of wished they appeared more on season two rather than being stagnant minor characters.

Mamoru is a monkey shikigami. In the first episode of season two, Nanami took care of a shikigami egg as a test by Otohiko in order to attend the Divine Assembly. The egg hatched into a small monkey, which Nanami named Mamoru.

Mamoru’s normal form is a small brown monkey, wearing a red apron. He can also transform into a human child that has brown hair and eyes. In his human form, Mamoru’s red apron has his name written in kanji on the front. Mamoru is very cheery and affectionate towards Nanami. He has the power to purify evil and protect others, which is why he stays close to Nanami’s side.

Out of all the new characters introduced in season two, Mamoru is my favorite. He is cute and adorable in his monkey form. (I kind of want a plushy of him.)

Botanmaru is a seven year-old tengu from Kurama Mountain. Botanmaru comes down from the mountain to the human world in order to find Shinjirou Kurama and bring him back to the mountain so that Shinjirou can aid his ailing father (also known to be the leader of the Tengu clan).

Shinjirou is Botanmaru’s role model because they share similar experiences during childhood. Both of them were constantly punished by Jirou for their inability to fly. Botanmaru has a lot of determination and is hopeful that he will fly one day.

Botanmaru is not the only tengu character introduced in the second season. While watching Shinjirou’s story arc, I was able to see other adult tengu characters as well as little ones like Daidaimaru and Chiyomaru.

Aside from these minor characters, the main characters also transformed into chibi characters during various story arcs. Their chibi versions have similar personalities as their adult forms. The only difference is that they are just small, cute and fluffy. (I kind of want to have plushies of these characters too.)

I really hope they make a third season of Kamisama Hajimemashita as soon as possible. It is so cute and funny. I should also read the manga series as soon as I can. (It has been on my list for a while now.)

13 thoughts on “For the Love of Chibi: Thoughts on Kamisama Hajimemashita” Leave a comment ›