This is my last post for Fanime 2018. Although the con runs through Monday, my friends and I didn’t stick around. We left first thing in the morning and went to go get ramen in Oakland. Day 3 wasn’t as exciting as Day 2 but there were a few tidbits worth mentioning.

So I promised an overall loot picture and so here it is. I would like to thank my friend, Jason, for the pictures. This is all the loot that me, Mina, and Jason collected. #teamwork 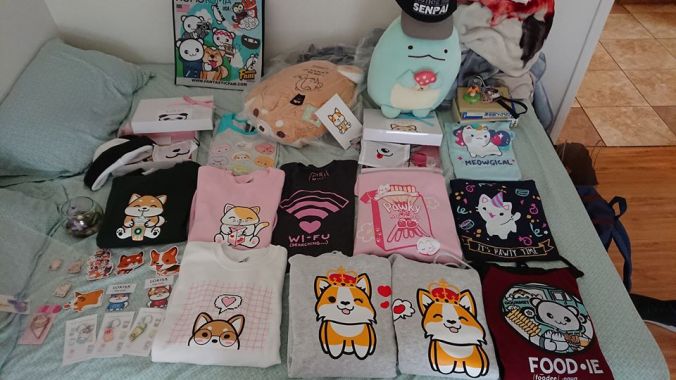 All of our loot. 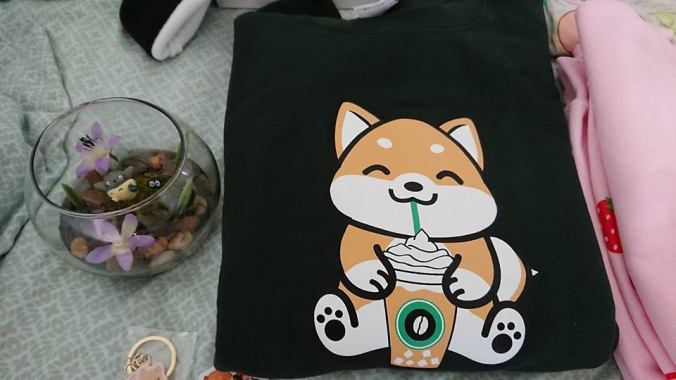 Due to the lighting, this sweater looks black. It’s really dark green. 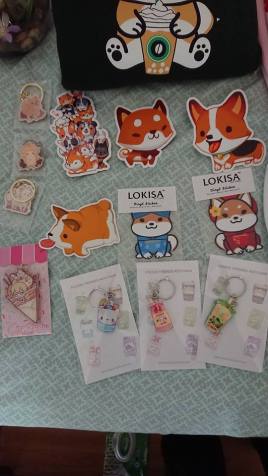 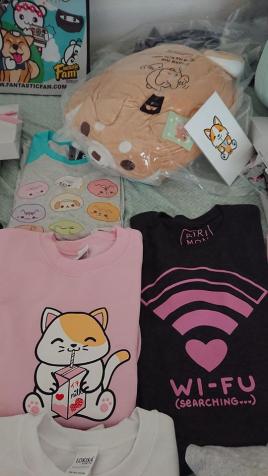 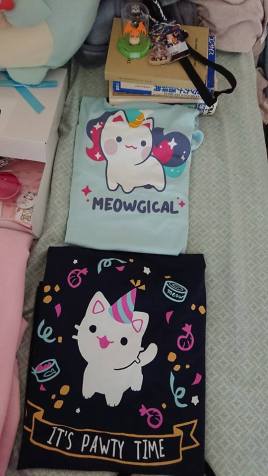 On our last day, we went to two +18 panels and we realized that we should have stayed in the first panel because the second panel we went to sucked. The first panel we attended was called Bishounen Bingo. We didn’t know why it was so popular and we were just there to observe what’s going on. Basically, the audience plays bingo and the winner gets an “adult prize.” It looked like a lot of fun and I wished we stayed but my friend really wanted to check out this other panel, Kimoi & Kowai: The Un-Kawaii. It was a mistake to stay at this panel because it wasn’t what we were expecting. We stayed because we were curious as to how this trainwreck would end. By the end of it all, my friends and I were dissatisfied that we wrote a horrible evaluation of the panel in the Fanime comment box. It was actually the first one I ever wrote for Fanime too.

A few reasons as to why I didn’t enjoy that panel:

While  I was at that panel, I was thinking of ways on how I would run it. To be honest, I think I would have done a fairly good job if I was given that topic. In fact, one of my dreams is to run my own panel at a convention. I just don’t know what I’ll talk about yet.

Also, it has been noted by my friends that we will attend Bishounen Bingo next Fanime because it looks like so much fun!

Just Something About LynLyn is a member of the WordAds Program. I permitted ads to run on my blog so that I can get paid by cost per impression (CPI). So I would really appreciate it if you turned off your Adblocker on this website so that I can earn some money. With the earnings I make, I will use the funds to create better content for you all, and you will also help feed a poor graduate student.