First of all, I would like to apologize that I didn’t get these traveling blogs out earlier in the summer. I wasn’t busy or anything. I just wasn’t in the mood to write them. But now that summer is over, I think it’s time to reminisce about the good times since I am heading back to school next week.

On my first day in Hawaii,  we went to Ala Moana Center and ate at the food court. I’m not gonna lie. The shopping malls over there have better food than what we have here in Northern California. I think maybe it’s because I like seeing a variety of fast food Asian cuisine selections.

Anyways, I got myself a poke bowl because well it’s Hawaii and Hawaii has some of the best fresh fish and it’s known for poke. For the price of the poke bowl, it was worth the $14. They give you a lot of raw fish in contrast to what you get in California.

I also got a Dole Whip at the request of my sister. I know you can get this at Disneyland but I think it’s a different experience when you have it in Hawaii since they have the Dole plantations. And it tasted pretty refreshing since it was quite hot there.

The next day we attended our first of many family reunion events. The first place we visited was China Man’s Hat Beach (this is what the locals call it and I think the reason why it was given this name is pretty self-explanatory). The official name of that basalt islet is Mokoli’i and it is part of Kualoa Regional Park. 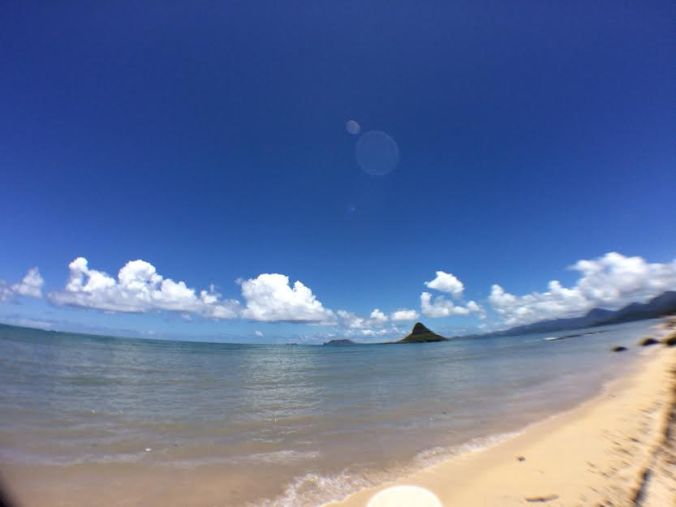 I visited China Man’s Hat Beach before when I was younger with my family. Back then, we didn’t think we would be coming back here but luckily we were able to. It still looks the same. This beach isn’t as populated with tourists compared to the other beaches we visited on this trip—and I like that actually because the beach is quiet and intimate. People are more spread out in their own little picnic areas, so you don’t feel like you’re invading their territory.  However, there isn’t much sand on the beach and the small cliff isn’t really comfortable to sit on.

Also, we saw some trailers over at the side of the road and my aunt told us that’s where they are shooting Jurassic Park. I kind of wanted to get a closer look but that would be trespassing and I don’t want to get in trouble for that.

Trying To Capture That Aesthetic

I accidentally took a picture & it ended up looking good.

Going to China Man’s Hat Beach was nostalgia for me. Back then when I first saw this place, I thought it was really pretty (and it still is).