Gyu-Kaku is a Japanese BBQ restaurant and they have many locations in Northern and Southern California and the rest of the US. It is my cousin’s favorite restaurant and she invited me to go have an early dinner with her there.

I have been to Gyu-Kaku once with a friend and haven’t gone back since until yesterday. In comparison to the first time I had it and my experience yesterday, Gyu-Kaku was a different experience with my cousin. My cousin knows her meat and knows how to cook it well. Truth be told, my cousin comes here way too many times, but she has some awesome BBQ hacks.

I recommend that you come here during their happy hour specials to get the most out of your money because the portions are somewhat small but they have satisfying happy hour prices. Some of my favorite meat include the Toro Beef, Beef Tongue, and Harami Miso Skirt Steak. As for non-meats, the spicy cabbage salad and the spicy tuna volcano are delicious. 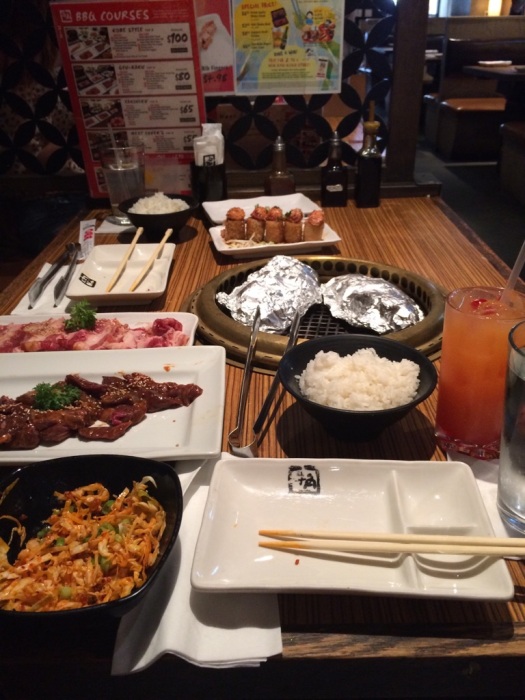 After Gyu-Kaku, we went to get milk tea at this boba shop called Tea 4 U (T4). I got a Pearl Earl Grey Milk Tea. It was good but then I tried my cousin’s drink, Winter Melon, and I realized that I made a mistake and should have ordered that one because it tasted amazing. It wasn’t too sweet and it tasted like tea (I originally thought it would taste like melon or some sort of fruit). We also had egg puffs with a cream sauce. I love that boba place and I want to go back there again.

After that, we went to a sweets cafe called The Sweet Corner. I wanted to buy everything, but I know I shouldn’t. I did get a little something to take home, an Oreo cheesecake and a tiramisu cup.